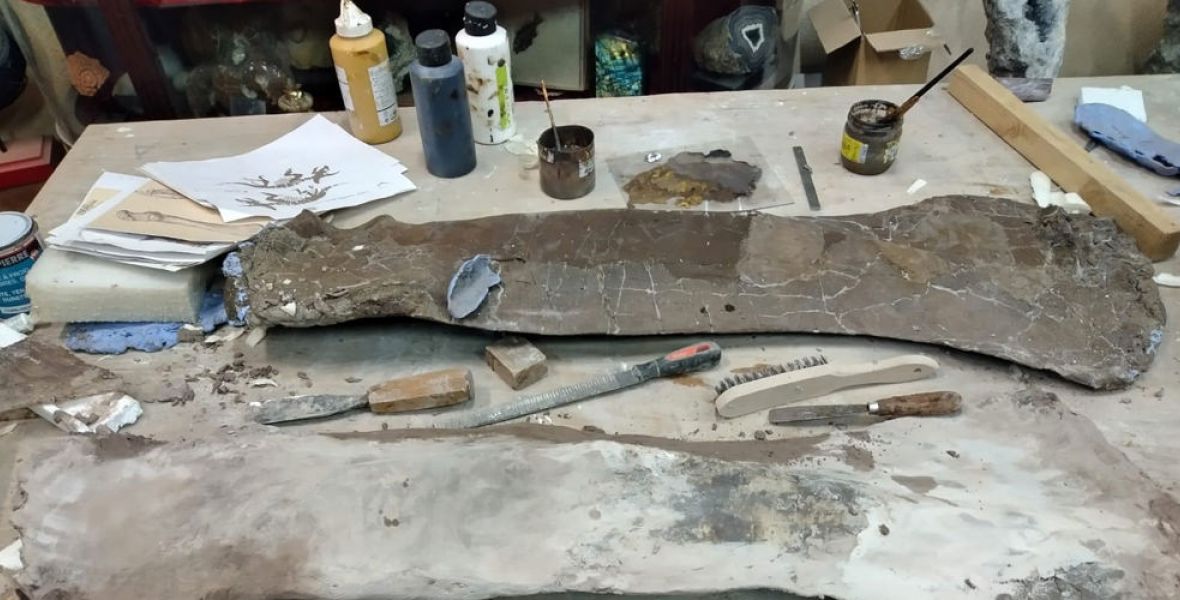 Our activities began in 2002 and the company initially took the form of an art gallery devoted to Science and civilizations.

Little by little, under the influence of its leaders, Eric Mickeler and Eric Geneste, the activity gradually shifted to the commercial paleontology sector, which ended up becoming a central activity, as the success was overwhelming.

Eric Geneste then devoted himself, within their professional association, to private sales, while Eric Mickeler successfully offered his services to major international auction houses, Sotheby's and Christie's. 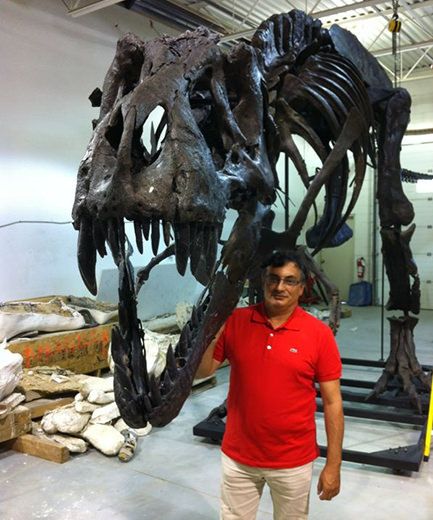 ERIC MICKELER, A FORERUNNER AND SCHOLAR IN THE SPIRIT OF THE ITALIAN RENAISSANCE

Eric Mickeler, Curator of the New Dinosaur Museum in Prague, which is currently being built a short distance from the runways of Prague International Airport, seems to have had several lives.

As a young man he was interested in entomology, botany and more precisely orchidophilia with talent and energy, then in tropical ornithology, until he set up his own observation missions. He then travelled through French Guyana, South East Asia, Indonesia and Papua New Guinea in the 1980s.

He will be remembered as an "acclimateur" of bird species that are still very rare in Europe. Despite this passion, which he shared with some of his clients such as His Excellency Sheikh Saoud al Thani, did not leave him, he was soon distinguished by the French administration, which quickly called upon his services.

At the same time, he revamped the French Natural History sales and developed the first sales of dinosaurs in Europe through his collaboration with Christie's and then with Sotheby's.
The dinosaurs he appraised flew from Boston, Prague, Madrid, and Brussels.

He also promoted the loan of specimens of dinosaurs and other marine reptiles to the Paleospace Museum in Villers sur Mer (France), to the Oceanographic Museum in Monaco, and also the loan of an Allosaurus to the Royal Museum of Natural History in Brussels, which will present a dinosaur advanced as a new species by Eric Mickeler.

In the culmination of a long and successful career, the Royal Museum of Natural History in Brussels will recognise the subject appraised by Eric Mickeler as a new species.

Having frequented excavation sites from Lebanon to the United States, he can also be found in museums and as co-editor of numerous works of art on Hopi and other Indians. A relationship with Nature without any doubt...

Eric Mickeler is a forerunner and we invite you to follow his sales with Sotheby's in Hong Kong, Paris, and New York. 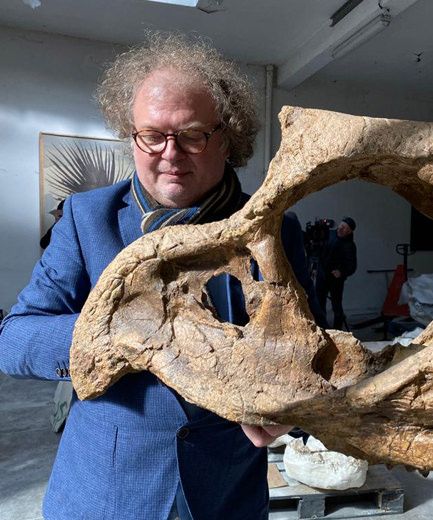 Eric Geneste is not only the author of books that can be found in bookshops of National Museums, but he is also a multifaceted entrepreneur.

He began a successful career in archaeology and became a consultant for auction houses because of his experience; he will lead and develop auctions focused on archaeology, the primitive arts, and then very quickly on Natural History, which captivates him as much as it does all of us.

As CEO of THÉTIS, of which he is a founding partner, he manages the company's image and the content of the commercial offer, allowing him to offer a multiplicity of services during the sales or after-sales.

With Thétis, Eric Geneste professes that you don't just buy a dinosaur, you buy a fun and promotional tool with instructions for use, a team ready to help you, and an after-sales service that frees you from a multitude of tasks.

Being an expert for 11 years at Sotheby's auction house, Eric Mickeler writes sales catalogs on dinosaurs and advises, within the brand-new company THÉTIS, Portuguese restructuring of their old companies, all the major dinosaur collectors, but also the companies which would like to mark their difference and develop their commercial activities thanks to the Dinosaur, conceived as a commercial ambassador of weight.

Eric Mickeler, one of the figures of commercial paleontology, omnipresent through thousands of news pages on the internet, proposed and produced animations such as the presentation of a Diplodocus at Heathrow airport in GB, an Allosaur dinosaur on the Eiffel Tower, and a dinosaur exhibition in the Grand Palais in Paris. He became “Le monsieur Haute couture du dinosaure” because the most beautiful dinosaur files for sale pass through his hands and are selected by him, to be marketed by THÉTIS, through the Eric Mickeler Fossiles Quality Label. 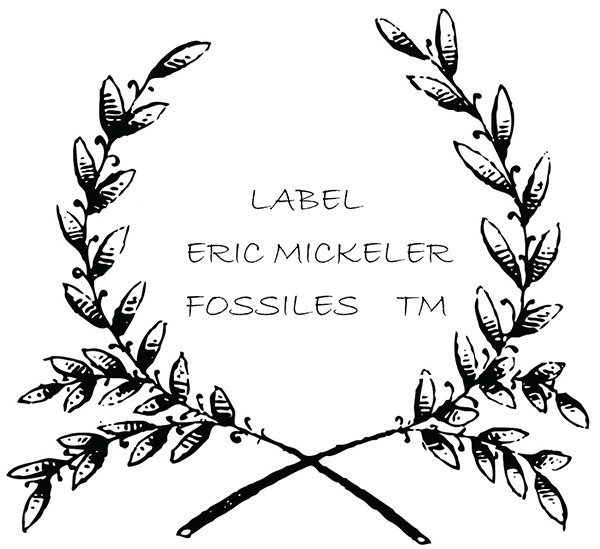 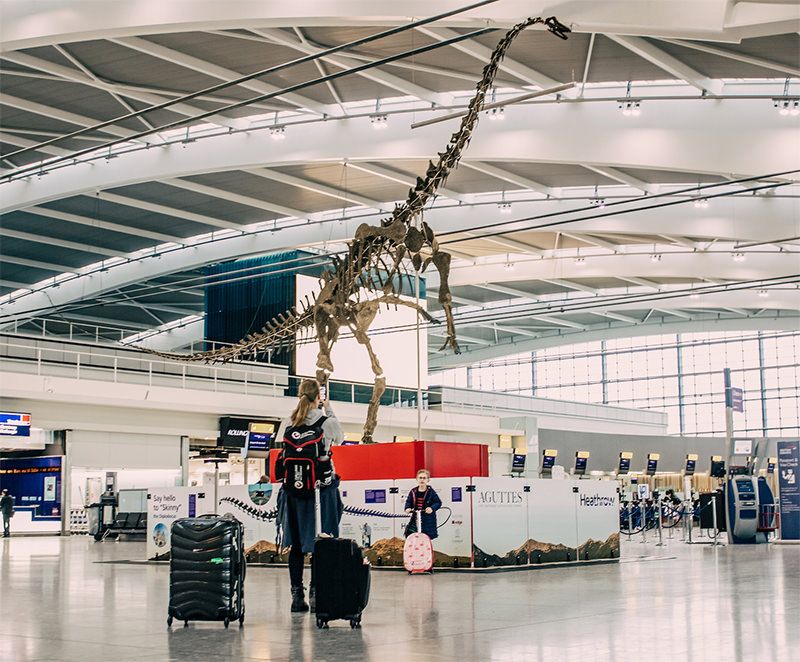 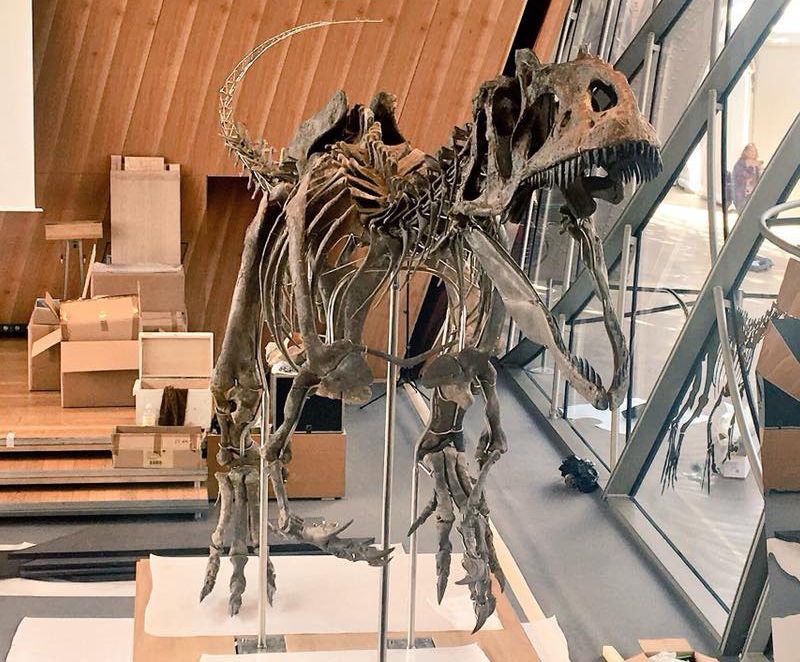 One of the largest and most modern private dinosaur museums in the world, Dinosauria Museum Prague, will open its doors on October 4th 2021.
Dinosauria Museum Prague is located at the POP Airport complex in Prague-Tuchoměřice. It will offer visitors a trip 200 million years back in time within a space encompassing 4,000 m2. The highlight will be a 24-meter-long, 154-million-year-old skeleton of a Diplodocus that is made up of more than 90% original bones. There will also be two imposing Mosasaurs and a Triceratops horridus. “Our triceratops, which we named Trik, is among the best-preserved of its kind. Because of the healed wounds that are visible on the head, we believe it survived an attack by the most feared predator of the day, the T-Rex,” museum palaeontologist Štěpán Pícha said of Trik’s life. 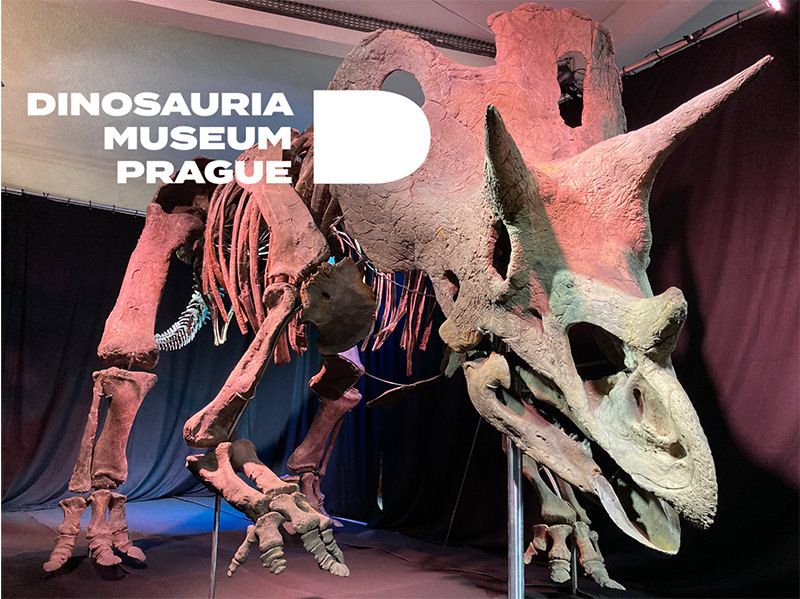 Dinosaurs as commercial ambassadors around the world

Home of some Thétis dinosaurs, selected by Eric Mickeler, around the world

A dinosaur like Skinny remains a commercial emblem for a company. It is a means of communicating powerfully and many companies around the world have chosen a great fossil to develop their trading power: 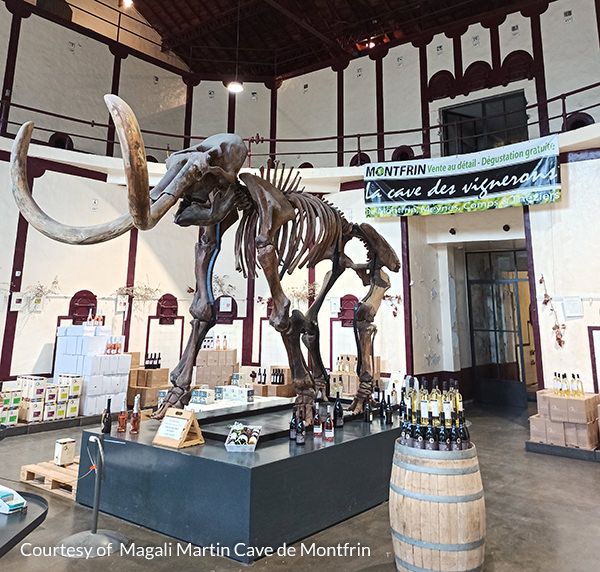 A wine company, the VINEYARD OF MONTFRIN, has acquired a mammoth under Eric Mickeler’s expertise and this company has seen its sales increase by 30%. 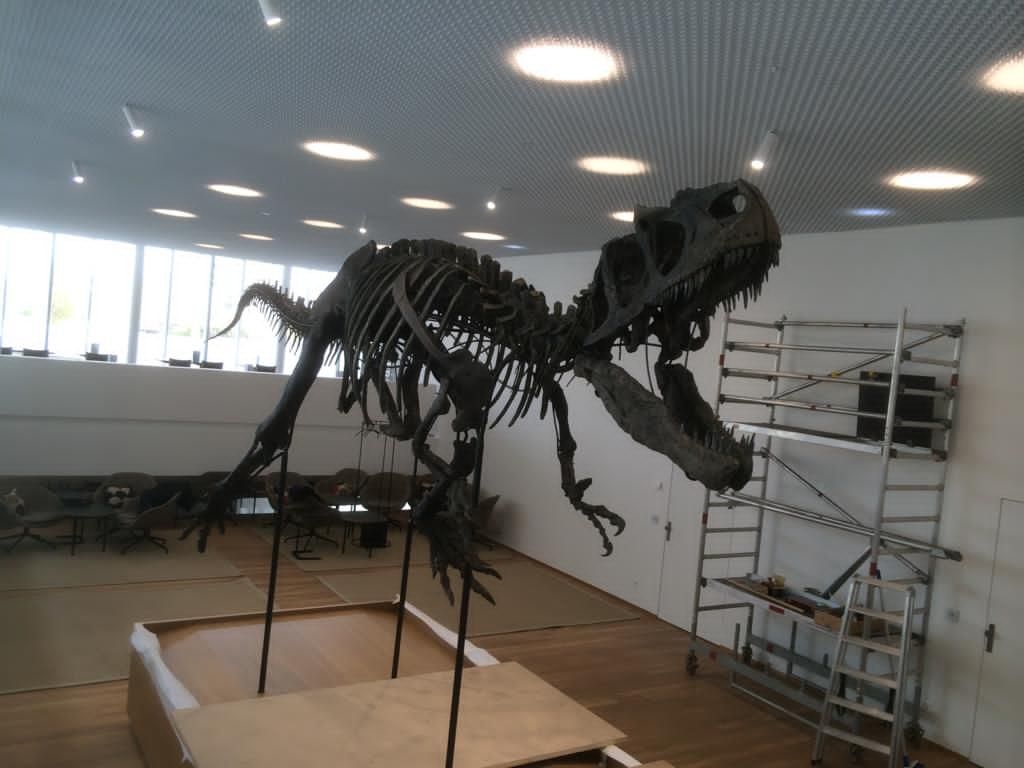 NOVARTIS, a large laboratory, has decorated its campus in Basel with an Allosaurus dinosaur, bathing the premises with a scientific and innovative atmosphere, conducive to its activities and image. 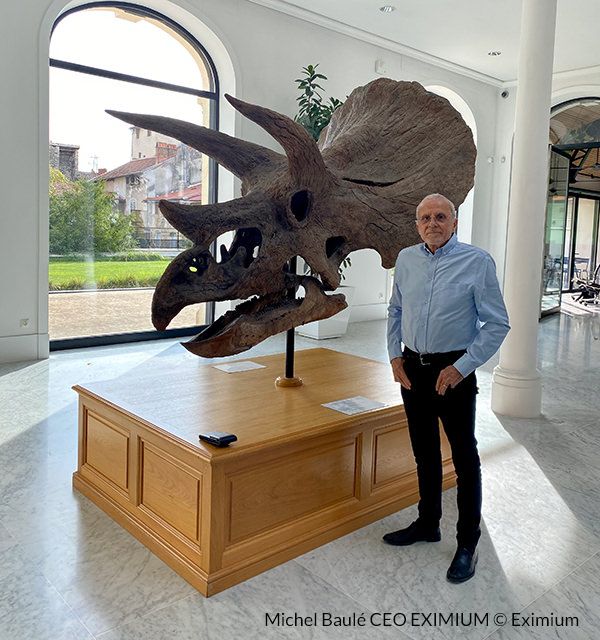 A Holding Company called EXIMIUM, which has opted for the acquisition of a Triceratops head, have already benefited greatly from the curiosity of their institutional public. 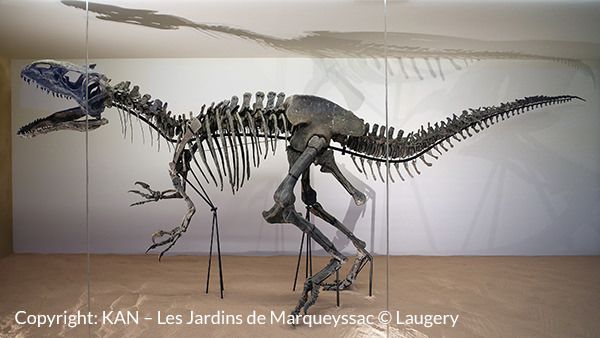 Kan, an Allosaurus, joined the "Jardins de Marqueyssac" in Dordogne to become its commercial, let's say, cultural ambassador. This specimen, selected by Eric-Mickeler co-founder and partner at Thétis, and acquired by Kléber Rossilon, is exceptionally complete and is one of the very rare Allosaurus skeletons, known to date, to present such integrity and state of conservation.

SOPREMA saw its employees very proud of the acquisition of an amazing mammoth, emblem of their flagship industrial product.

About Skinny - Finding dinosaur skin is the most beautiful discovery

It is said that Skinny's skin would probably have made, with its scales, a good handbag for Louis Vuitton, the most famous of leather bag makers.

Delicately packaged and shipped to Europe in the Paleontological Preparation Laboratory, the sedimentary blocks containing Skinny have spent 12 months, not less than 3000 hours, in the hands of experts to clear the bones, skin prints, and to be presented according to a revolutionary method.

Nearly millimeter by millimeter, grain-by-grain, the chief fossil preparer, and his team, among other things, cleared the skin, making Skinny one of the subjects in his group that has the most impressions of skin.

Because for a paleontologist, finding dinosaur skin is the most beautiful discovery, we can tell our readers that having "such a level of fossilization is as rare as winning the UK lotto. Skinny, the dinosaur, most probably had to be buried very quickly in an anaerobic environment, which allowed the very good conservation visible. " E. Mickeler.

A simple observation shows that Skinny's skin, the unknown dipodocidae, Heathrow airport's star, was covered with tiny scales of a few millimeters each. Unlike the lizard or snake, Skinny's scales did not overlap. If we had touched this dinosaur, the sensation would probably not have been that of smooth skin, but a rather uneven surface. 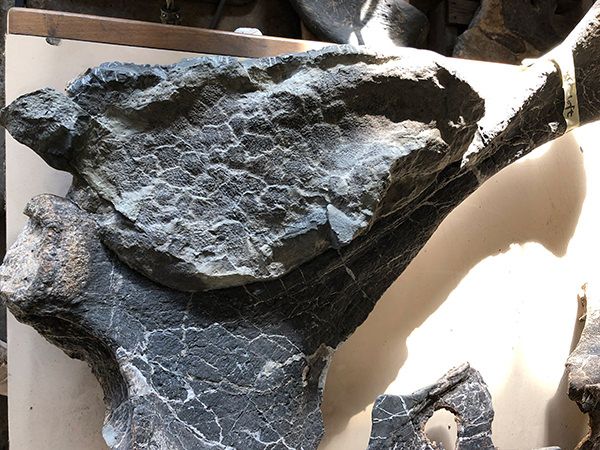 You can see the scales
Read more...

With Skinny, which apparently has the most surface area of skin impressions, researchers have samples from several areas of the body of this diplodocidae but not the 'full suit'. It will be up to them to study the possibilities that this dinosaur has had some feathers in some parts of his body or if he was totally devoid of it.

For more than a century, paleontologists were forced to imagine the appearance of dinosaurs, having found only their bones. Thus, based on the image of contemporary reptiles, researchers imagined dinosaurs with thick skin and dark color, adopting brown and green tones (like crocodiles and lizards), or completely gray.

Indeed, it was very difficult to imagine what a dinosaur appeared like by looking only at its skeleton (especially with the limited scientific means of the nineteenth century). Imagine what would a duck or swan look like without feathers and without a beak? A cat or a rabbit, without fur, without ears? How do you imagine the layer of fat covering certain animals, such as hippos or whales? Or the crest of cocks and turkeys? Or the elephant's trunk?

The past 30 years have challenged these classic patterns and we have witnessed a renaissance of dinosaurs to whom we now lend colors, feathers, or protofeathers.

Therefore, if it is not said or contradicted that Skinny had colored skin, it is however by extrapolating that fact that THÉTIS and the Paleomoove Laboratory have built a red lacquered base to present it, conferring, by visual proximity, a certain attraction to Skinny, Treasure of Humanity, which is now as flamboyant as a work of art.

Moreover, whereas in the past it was impossible to know the skin color of dinosaurs (the pigmentation is not preserved in the fossil state), new scientific procedures have experimented on the remains of feathered dinosaurs found in China that were found in a good state of conservation.

Thus, the result of these analyzes showed pigmented cells, revealing the plumage pattern of some of these extinct creatures.

On subjects preserved in a "mummy" state, some teams around the world are also trying to extract protein fragments from samples taken, following a very interesting study track.

Now, Skinny's petrified skeleton is ready to meet the public at the Durbuy Amusement Park. A post-mortem glory awaits him.

Paleontologists who have studied it since its discovery, are waiting for their description to appear in a specialized scientific journal to reveal the exact name they will give to this new species.

If the skin does not tell us anything about what dinosaurs ate, the study of dinosaur droppings, fossilized feces called coprolites, tells us about the diet of these giants.

These fossilized remains allow us to learn a lot. Wood was found in herbivorous dinosaur droppings (Karen Chin, University of Colorado, Boulder).

In the United States, a 36-year-old history fan, Georges Frandsen, has been collecting dinosaur coprolites since the age of 18. With his collection of 1277 fossilized feces, he broke a world record now featured in the Official Guinness Book of Records. 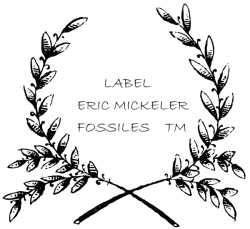 THÉTIS, the choice of Ethics, Honesty and Rightness